If you have been following the FIFA World Cup, you will have seen many ads for the vivo X90 series. One of the three models came out highly regarded in last week’s poll, while his two brothers remained in his shadow.

We are talking about the vivo X90 Pro +. Over half of the people who voted expressed interest. Another quarter of voters can be swayed in its favor if it performs well in reviews compared to other camera phones with 1-inch sensors.

The vivo X90 series at a glance

Since the X80 Pro+ has been cancelled, the X90 Pro+ is an even bigger upgrade over the 2021 series than it would have been since it’s measured against the regular X80 Pro. Some X80 Pro owners in the comments were wondering if it was worth worth upgrading. We can’t answer yet as the phone is still days away from release.

The vivo X90 Pro also features a 1” sensor and costs less. However, the loss of the periscope lens and Snapdragon 8 Gen 2 chipset has really limited its appeal. We’re interested to see how the Dimension 9200 chipset performs, but that alone isn’t enough to make the phone a success.

Sure, people have noted that the Pro has faster wired charging (120W vs 80W) and matches the Pro+ on wireless charging (50W), plus it has a slightly larger battery (by 170mAh). However, that wasn’t enough to compensate for the downgrades. A lot more people are considering splurging on Pro+ instead of getting the regular Pro. 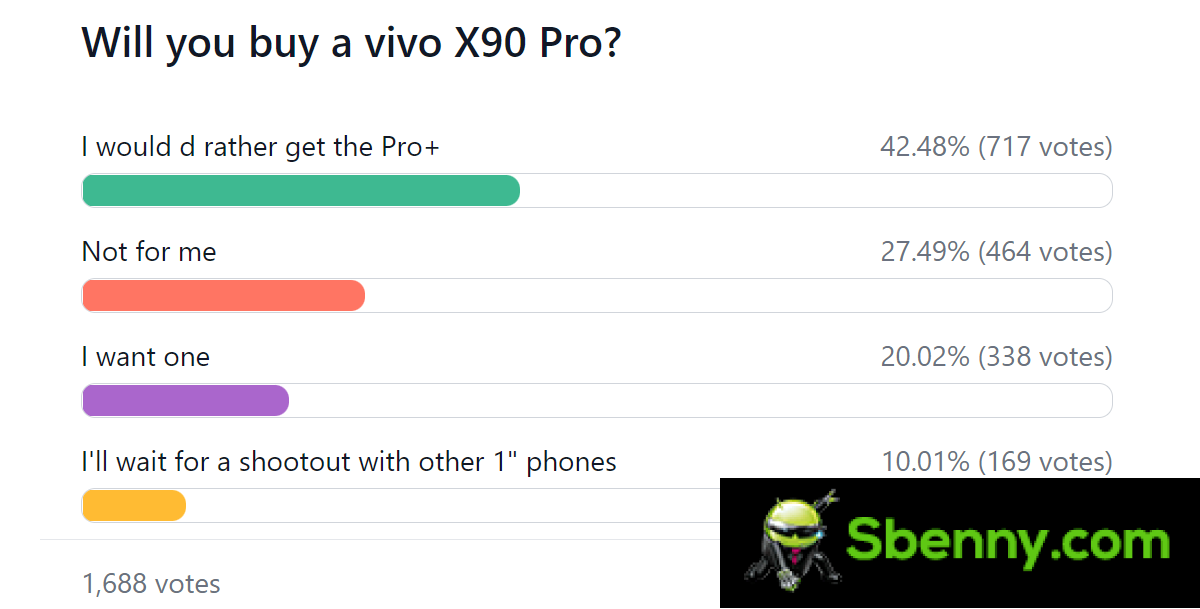 As for the vanilla vivo X90, voters didn’t see much potential in it. With an inferior screen and camera setup, the vanilla model failed to attract much attention in the survey and comments.

Some people were concerned about the availability of the X90 series in Europe. While vivo hasn’t announced any official plans, the vivo X80 Pro has been available in the Old Continent since June, so we expect the X90 Pro to be as well, perhaps even the Pro+. It may be a couple of months before we find out, though.

Tags: I live, Weekly survey
Let's talk about "Weekly Survey Results: The vivo X90 Pro+ is showered with love" with our community!
Start a new Thread